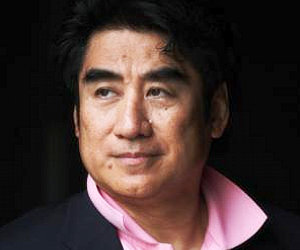 Dr Handa graduated from Doshisha University with a degree in economics. He completed a Master Class in vocal music at Musashino Academia Musicae and earned a masters degree in creative arts from West Australian Academy of Performing Arts at Edith Cowan University, Western Australia. He holds a Ph.D in Literature from the Academy of Arts and Design, Tsinghua University, as well as a Ph.D in Literature from Zhejiang University, China for the Study of Chinese Classical Text. He has received the honorary degree of Doctor of Humane Letters from Juilliard and Honorary Fellow from Corpus Christi College, University of Oxford.

He is Co-founder and Chancellor of the University of Cambodia and professor at its College of Political Science. He is also a Professor at the College of Japanese Language and Culture, Zhejiang Gongshang University, China and holds positions at several other universities in the UK and China.

In the world of the Arts Dr Handa was accredited by the Chinese Government as First Grade National Master of Fine Arts, First Grade National Opera Singer and Second Grade National Peking Opera Actor. He is a Noh performer of the Hosho School, member of the Noh Association and President of Hosho Toshu Noh Troupe. He is also representative of the organizer for the "Tokyo Dai Takigi Noh"and founder and artistic director of Totoami Opera Company of Japan as well as of Toshu Theatre Troupe and is Senior International Commentator for Southeast Asia Television and Radio and Editorial Writer of Southeast Asia Weekly.

Dr Handa received the Distinguished Service Medal from the State of Western Australia and the Keys to the City of Perth and the City of Swan. He was also awarded the Medal with Dark Blue Ribbon of Japan.

Dr Handa is the first Japanese to be appointed to the post of vice president at the Royal National Institute for the Blind (RNIB), UK oldest and largest charity, in recognition of longstanding contributions to blind welfare. He is a Member of the Board of Directors at the Association for the Blind of Western Australia.

In the world of professional golf he is Chairman of the Legends Tour (Women's Senior Golf Association) of the United States, President of the Japan Instructor Pro Golf Association, Chairman of the Japan Foundation of Occupational Skill Promotion-Golf School Instructors Association, Honorary lifetime member of the PGA of Australia, and Patron of Golf Australia. Dr Handa has recently been appointed International Ambassador Golf Australia, only the second individual appointed after Greg Norman, International Ambassador of the Asian Tour as well as Faldo Series Asia, and Honorary Advisor of the Faldo Trust for Tomorrow's Champions (Asia) Limited. He is Chairman of the International Sports Promotion Society and received the 2010 "Asia Pacific Golf Personality Award" from "Asia Golf Monthly".